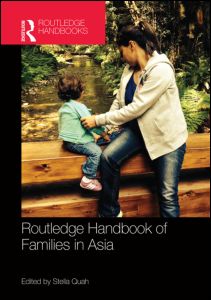 Routledge Handbook of Families in Asia

This chapter discusses paternal involvement and child outcomes in three Asian countries: Japan, China and Korea. But, before we embark on these countries, a succinct background is in order. In the latter half of the twentieth century, many Asian countries underwent significant demographic and socioeconomic changes that have influenced families (Quah, 2009). Although these changes vary across Asian countries, major transformations include an increase of nuclear families, a decline in fertility, and a rise in women’s educational attainment and labor force participation. According to the World Bank (2014a, 2014b), the female labor force participation rate increased between 1990 and 2012 in such countries as Korea (47 to 50 percent), the Philippines (48 to 51 percent) and Malaysia (43 to 44 percent), whereas the rate remained relatively stable at around 50 percent in Japan. With respect to women’s educational achievement, the World Bank data clearly indicate that women’s average years of schooling increased from the mid-1980s to 2000 in countries like Korea (7.8 to 10.01 years), Malaysia (4.59 to 6.20 years), the Philippines (6.73 to 8.18 years), Japan (8.38 to 9.08 years) and China (4.04 to 5.08 years). Women’s higher educational attainment, through greater career aspirations and higher marketability, may account for the increase in female labor force participation, which, in turn, has been negatively linked to the fertility rate (Bloom et al., 2007). In fact, a decline in fertility has been recorded in Korea (1.6 babies born per woman in 1990 to 1.3 in 2012) and Malaysia (3.5 in 1990 to 2.0 in 2012), where women’s educational level and labor force participation have increased over the last few decades.