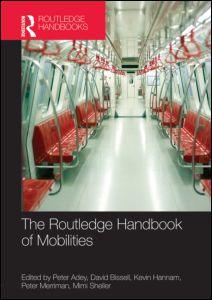 The Routledge Handbook of Mobilities

In a recent collection of essays, the Indian author and activist Arundhati Roy takes us to the scene of a protest at Jantar Mantar on Parliament Street in New Dehli. An old observatory built in the eighteenth century by the Maharaja Sawai Jai Singh II of Jaipur, Jantar Mantar is the only remaining site in Dehli where Section 144 – the revived nineteenth-century law that bans the gathering of more than five people – is not enforced. In the spring of 2010, over a thousand pavement dwellers descended on the site to demand “the right to shelter, to food (ration cards) and to life (protection from police brutality and criminal extortion by municipal officers)” (Roy, 2011: 152). Who, Roy asks, are these protesters and where have they come from? They are, she writes, the “representatives of the estimated sixty million people who have been displaced by rural destitution, by slow starvation, by floods and drought (many of them man-made), by mines, steel factories, and aluminum smelters, by highways and expressways, by the 3300 big dams built since Independence, and now by special economic zones (SEZs)”. They are, Roy continues, the “millions who make up the chain gangs that are transported from city to city to build the New India”. They are, in other words, the “shadow people who live in the cracks that run between schemes and institutions. They sleep on the streets, eat on the streets, make love on the streets, give birth on the streets, are raped on the streets, cut their vegetables, wash their clothes, raise their children, live and die on the streets” (Roy, 2011: 154, 153; emphasis added).