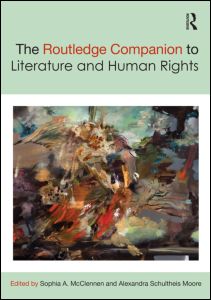 The Routledge Companion to Literature and Human Rights

Writing in the wake of the Declaration of the Rights of Man and of the Citizen (1789), William Wordsworth argued that the pleasure of poetry was not a matter of “amusement and idle pleasure” ([1802] 1986: 166–67), but rather an extension of the revolutionary idea of foundational human dignity. Poetic pleasure, he writes, is “an acknowledgment of the beauty of the universe … homage paid to the native and naked dignity of man, to the grand elementary principle of pleasure, by which he knows, and feels, and lives, and moves” (Wordsworth [1802] 1986: 166–67). Further, poetic pleasure fosters universal human sympathy:

We have no sympathy but what is propagated by pleasure. In spite of difference of soil and climate, of language and manners, of laws and customs, in spite of things silently gone out of mind and things violently destroyed, the Poet binds together by passion and knowledge the vast empire of human society, as it is spread over the whole earth, and over all time.

(Wordsworth and Coleridge 2013: 105–7) Contemporary historian Lynn Hunt concurs, arguing that the Declaration of the Rights of Man and of the Citizen – often pointed to as the genesis moment of modern human rights – was made possible only because of the seductions of literary pleasure. She claims that the rise of the epistolary novel – Samuel Richardson’s Pamela (1740) and Clarissa (1747–48) and Rousseau’s Julie (1761) – made the very idea of the rights of man possible by teaching readers how to empathize across race, religion, gender, class, and nationality. The novel as a technology of storytelling, in sum, changed the human experience and practice of empathy, and this new, Wordsworthian, universalizing human empathy became the foundation of human rights.
Cite