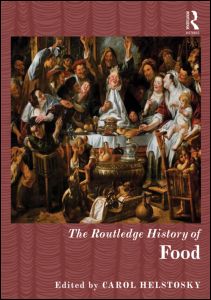 The Evolution of a Fast Food Phenomenon

The case of American pizza

The Routledge History of Food

Victor Ripp, an American author born from Russian emigrants, visited Moscow in the late 1980s and was struck by the Russian people’s fascination with the “quasi-mystical” aura of American goods, including fast food cuisine. “People were still talking about the Astro Pizza truck that recently circulated through the streets around the Kremlin,” he wrote, as if eating a slice of pizza enabled one to ingest the experience of being American, even for a fleeting moment. 1 Although Cold War communist ideology framed American materialist desires as wasteful, Ripp detected a note of “deep longing” in Soviet perceptions of American extravagance that seemed to coexist with an adherence to their own values (and food customs) as the “things that matter,” to use the words of Soviet Premier Nikita Khrushchev in the famous kitchen debates with Vice President Richard Nixon in 1959. Just as Nixon touted the dishwashers and material goods in the American home for liberating housewives from daily drudgeries, fast food has taken on a similar symbolic resonance, as a byproduct of the quick-paced, mobile American lifestyle. George Ritzer calls this process the “McDonaldization” of society, whereas the values of fast food franchising have assumed a central place in American business and popular culture in the generations following World War II. 2 Fast food, he argues, connotes much more than quick preparation foods sold at low cost; rather, it is a business model that privileges efficiency, conformity, mobility, and convenience over quality, artistry, and consumer comfort. Fast food restaurants characteristically standardize food preparation techniques, often using frozen, precooked, and prepackaged food, limited menus, and self-service. 3 Despite the culinary homogenization that the global conquest of pizza seems to suggest, makers of the cuisine exhibit remarkable national, regional, and local differentiation. The story of pizza, as it was reinvented from “Italian” to “Italian-American” to “American” cuisine over the last century, exemplifies how pizza’s categorization as “fast food” and as an “ethnic food” has evolved over time in relation to important transformations in American diet and culture.