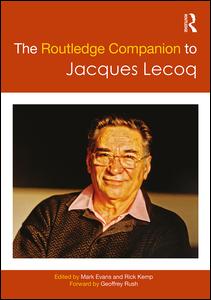 The Routledge Companion to Jacques Lecoq

At the beginning of Complicite’s production of Out of A House Walked A Man (1994), which is based on the Soviet writer Daniil Kharms’ stories and fragments of writing, one of the two actors who play Kharms, Toby Sedgwick, enters and announces that he is going to test out his theory of laughter. He glances around his audience, making eye contact with specific spectators to attempt to make them laugh. When one does, Sedgwick proceeds to play with the spectator’s laugh, building complicity with the spectator and making others laugh, then returning to the original spectator, embroidering the laughter, until nearly all are drawn into Sedgwick’s game, playing and improvising with the laughter. His improvisation appears effortless, but anyone who has taken a workshop on clown with Jacques Lecoq, Philippe Gaulier, or Pierre Byland recognizes that this is an exercise in finding one’s own clown. Most students will, in Lecoq parlance, ‘flop’, but paradoxically it is in the flops that one’s true clown is revealed. In Improvisation in Drama, Anthony Frost and Ralph Yarrow describe a workshop on clown run by Lecoq graduate and Complicite associate, Clive Mendus, with students at the University of East Anglia. They succinctly sum up the practice of the Lecoq clown: ‘The clown plays the realities of what and where and with whom he finds himself to be. He cannot know those realities in advance, for so much of it depends upon us, the audience, that it cannot be pre-planned’ (Frost & Yarrow, 1990: 68–69).

Locating the body in Englis...