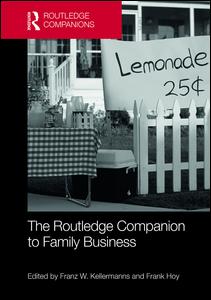 The Routledge Companion to Family Business

The corporate world pays increasing attention to face social issues, as firms care and spend resources and efforts towards environmental protection, safety, and health of employees, welfare and well-being of their communities, and in general to behave as responsible corporate citizens (Matten and Crane, 2005). Research has addressed this topic for decades, and several concepts emerged in different fields, from social entrepreneurship to corporate social responsibility, from social innovation to stakeholder management. The boundaries among these concepts are blurred, and strongly dependent on the theoretical lenses adopted as well as the streams of literature considered. Management, entrepreneurship, business ethics are instances of different fields, which definitely makes the topic multidisciplinary. While a focus on Social Entrepreneurship, and the difficulties in defining it and its main discussion areas, mainly refers to the mainstream entrepreneurship field (Mair and Marti, 2006; Peredo and McLean, 2006; see recent research avenues as reviewed by Pierre, von Friedrichs, and Wincent, 2014), the concept of Corporate Social Responsibility (CSR) belongs to other fields of research. The main difference relies on whether a social or a commercial aim is pursued by the organization. While social entrepreneurship deals with entrepreneurial activities with an embedded social purpose and driven to create social value, CSR pertains to the realm of ventures whose ultimate scope is to generate and increase personal and shareholder wealth (Austin, Stevenson, and Wei-Skillern, 2006). Thus, social entrepreneurship is broadly defined as the “process of creating value by combining resources in new ways that are intended primarily to exploit opportunities for creating social value” (Pierre et al., 2014: 44), and only currently the debate has centered around the extent to which social enterprises should pursue also commercial aims (e.g., Lundström and Zhou, 2014). Corporate social responsibility, instead, is meant as an evolving corporate strategy, which has an increasing importance among the (for-profit) firm activities (Carroll and Shabana, 2010). CSR, which is the focus of this chapter, has been debated for a long time in literature and the concept has evolved from claiming that the only responsibility of a business is to make profits (Friedman, 1979) to emphasizing the volunteering character of corporate initiatives aimed at benefiting its stakeholders and society, beyond any legal requirements (e.g., Crane and Matten, 2007; McWilliams and Siegel, 2001). In this study, we adopt a definition of CSR consistent with this latest idea of accomplishing initiatives beyond what is required by law: “A firm is socially responsible if it commits to integrate social and environmental concerns in its business operations and in its interaction with the stakeholders on a voluntary basis” (European Commission, 2011). This definition embeds both the volunteering aspect of responsible actions undertaken by firms and the strategic stakeholder management of private businesses.

More Than a Feeling