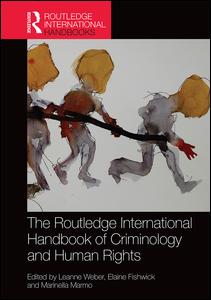 The Routledge International Handbook of Criminology and Human Rights

Feminist criminology as a body of scholarship has emerged over the past 30 years, largely a development of the Anglo-American scholarly community and spurred by the feminist movement of the 1960s and 1970s. There is no unified feminist criminology, yet there are commonalities among various strands of feminist criminology: the first commonality is the emphasis on showing that women ‘exist’ and matter as offenders, victims, and criminal justice professionals. Much like feminist awakenings in other social sciences (such as political science and economics) feminist criminologists recognize how women have been excluded, marginalized or silenced and strive to rectify this in their work. Rendering women visible means explaining their presence (or absence, as the case may be), and recognizing the explanatory power of gender and patriarchy. The second commonality among feminist criminologists is that gender is not a variable but a system of oppression. Patriarchy – the subordination of women to men – intersects with other kinds of racial, class, and ethnic oppression and must be exposed and resisted though research and practice. Gendered power relations are foremost, then, in the construction of crime, its modus operandi, how crimes are detected and adjudicated, as well as how victims are defined and treated. Gendered power relations are also present in police work, the courtroom, and in penal policy and practice. Traditional masculinity – that which emphasizes aggression, risk taking, dominance, physical strength and ambition, is criminogenic. Violence against women is a serious crime that needs in-depth analysis, and it should be understood from a gendered, power relations perspective. Feminist criminologists believe that research subjects should be understood in context, valued, worked with collaboratively, and empowered. Research should expose injustice and spur social change (Barberet 2014, Chesney-Lind and Morash 2011, Renzetti 2013).