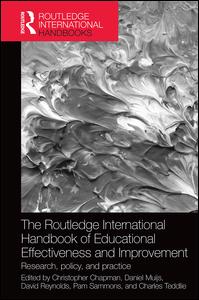 The Routledge International Handbook of Educational Effectiveness and Improvement

Educational effectiveness research (EER) has mainly been conducted in the West, and a key requirement of future EER is to test out the relevant theories and concepts in different international contexts – particularly in developing countries, where the EER knowledge base is very limited. Studies of educational access, quality, and related issues have historically been conducted in developing societies, often by international agencies, and more recently new school effectiveness and school improvement work has started in some other countries worldwide. This chapter reviews this work, and by means of case studies of selected EER in three regions that vary in terms of development – China, the Middle East and Africa, and mainland Europe – illustrates and assesses the extent to which EER methodologies and findings are perceived and validated. Moreover, the extent to which these settings require particular, contextualised approaches to EER is also examined, and there is discussion of the value of conducting international studies in order to develop further the theoretical EER framework. Of course, the issue of context specificity is also important and relevant as much within countries as between them, for example in relation to socio-economic factors, because evidence clearly shows that these have enduring influences on the performance of individual students and schools. Moreover, countries vary considerably in terms of the segregation of disadvantaged students within schools. However, consideration of contextual issues at more micro (student and school) levels in relation to EER is addressed by other chapters in this volume. It is therefore not the focus here, even though some overlapping themes are likely to emerge. Indeed, in line with this recognition of the macro and micro aspects of context, it is notable that recent research has emphasised the impact of three separate contextual environments on educational quality, arguing that ‘a good quality education arises from interaction between three enabling environments: policy, the school, and the home and community’ (Tikly, 2011: 11).