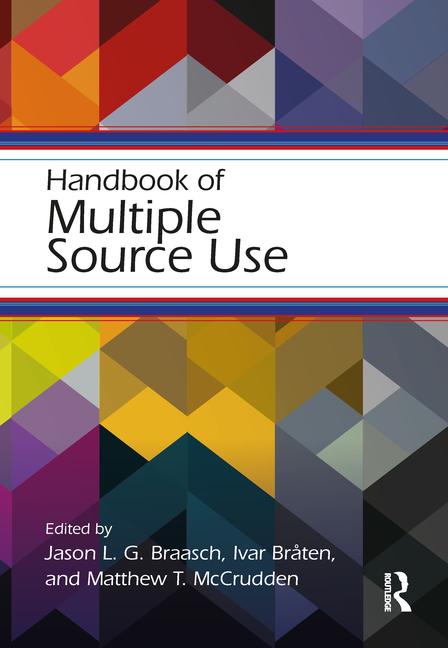 Handbook of Multiple Source Use

The advent of the Internet and other means of electronic dissemination of information has resulted in unprecedented access to, and proliferation of, multiple sources of information (Cisco, 2016). Searching through and making sense of this vast sea of information sources challenges the limits of human memory, attention, time, and expertise (Bromme & Goldman, 2014; Rapp, 2016). The sheer volume of sources available about any given topic requires learners who are able to navigate multiple texts, infer meaning from each of them, and then integrate that meaning into useful understanding and action. Doing so often involves complex cognitive and metacognitive processing (e.g., knowledge elaborations and judgments of learning) about multiple kinds of representations (e.g., text, pictures, video, simulations) of often abstract or complex topics (Azevedo, 2005). Further, these sources can vary in terms of the creators of the information (Macedo-Rouet, Braasch, Britt, & Rouet, 2013), the publication venue and context (e.g., website or newspaper, date of publication; Braasch, Bråten, Strømsø, Anmarkrud, & Ferguson, 2013), as well as who authored the content versus who is distributing it (e.g., when a website known for news publishes a paid advertisement article developed by a company). Finally, in the digital age, there are not only multiple sources of information; there are multiple curators and editors who determine what, when, and how information is disseminated, some of whom take their role seriously (e.g., academics), others who may not (e.g., peers in social media), and some who actively seek to promote fake information to make a profit (Silverman, 2016). Therefore, learners must become critical consumers of not only the information within and across multiple sources, but also the authors and distributors of that information (Alexander & the DRLRL, 2012; Goldman, Britt, Brown, Cribb, George, Greenleaf, Lee, & Shanahan, 2016; Greene, Yu, & Copeland, 2014; Leu, Forzani, Rhoads, Maykel, Kennedy, & Timbrell, 2015; Stanford History Education Group, 2016).