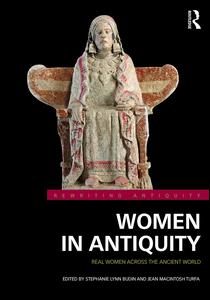 Writing a chapter on ‘women’s daily life in ancient Rome’ is a challenge, since it involves three questionable categories: ‘women’, ‘daily life’ and ‘ancient Rome’. First, ‘women’ is such a vast category as to be almost unmanageable. Roughly half the population of the Roman world consisted of women, who were divided by class, juridical status, domicile, language, ethnic background, wealth, age and marital status as much as they were united by the privileges and constraints of their sex: their ability to give birth and breastfeed, and their exclusion from the army (at least from its fighting ranks) and from political and juridical office. Second, ‘daily life’ is a highly elusive notion. It encompasses the daily routine of individuals that is obvious to the person in question and considered uninteresting for others; therefore, it is usually unrecorded. A person’s ‘daily life’ is in part occupied by the basic need for food, sleep and shelter, which are alike for all human beings. Yet, cultural values interfere, for instance, by allotting women a smaller share of the food when the amount is connected with social esteem (Hemelrijk 2015). It further consists of the daily occupations to earn a living, which were of prime importance for all but the leisured class. In the Roman world, work was certainly divided by gender, but perhaps less so than the ancient evidence suggests; gender norms tended to push women back into their domestic tasks much more than most women could actually afford to do. 1 Since women’s work is dealt with elsewhere in this volume, I shall not discuss it here. Women’s ‘daily life’ will therefore be defined here as their day-to-day activities apart from possible work to earn a living. Lastly, the term ‘ancient Rome’ can be used for the city of Rome in antiquity and for the Roman world at large. I shall here take an intermediate position and focus on the Roman Empire, particularly on its western part. Because of the lack of evidence for women in the rural areas, the main concern of this chapter will be women living in the numerous Roman cities of Italy and the western provinces in the first three centuries of the Empire.

The role of Egypt’s dynasti...

Birth and Motherhood Among ...