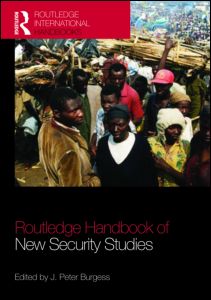 Authored by: Mark B. Salter

Surveillance is the organized observation of behavior with the intention of care or control of the observed, and forms an important object of study in new security studies. Traditional security studies are organized by the state/anarchy and the inside/outside dichotomies: domestic policing inside and international, military war-fighting outside. Surveillance in this traditional context was of markers of military power through reconnaissance, intelligence, espionage, international observation, or diplomatic maneuvering (Der Derian 1992). Domestic policing and surveillance of international private actors were the domains of criminology and sociology or comparative politics and really outside the scope of mainstream research programs (Andreas 2003). Security, however, does not stop at the water’s edge or the territorial border. New threats to the state, society, and economy are now much more diffuse: global mobility and migration, international organized crime, drug, or terrorist groups, capital flows and networks of financial institutions, to name a few. As Bigo (2006b) and others demonstrate, contemporary security practices are no longer strictly divided by the border: police and intelligence agencies increasingly cooperate regionally and internationally, while the strict division between military and domestic policing operations is increasingly blurred. For example, the Schengen Information System (SIS) and Eurodac are fed by and provide information about visa and asylum seekers to European border authorities, immigration agencies, police, and intelligence agencies (and are under pressure to share that data with other countries). Also in the European area, military tactics, hardware, and personnel are often used for border policing, both at the immediate level and at a distance. The expansion, internationalization, and securitization of surveillance is due to the empirical increase in mobility and capital flows enabled by economic, social, and political globalization and the technological innovation of the information and communications revolutions. In short, the threats to security are conceived by policy-makers and practitioners as less traditional and more asymmetric, risk management has come to dominate deterrence as a strategy (see Kessler this volume): more people, more information, and more things are moving and there is a greater capability to track and monitor those movements.