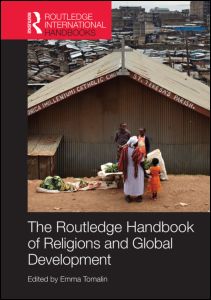 Religion and Development In India And Pakistan

The Routledge Handbook of Religions and Global Development

Across South Asia 1 religious actors (both individuals and organizations) have always played an important role in social and welfare activities, long before the emergence of the contemporary development project following the end of the Second World War. Indigenous mechanisms and institutions supported by religious bodies, providing basic services such as health, education and the distribution of water and donations of food, have been an important part of the social landscape of South Asia for centuries, and religious actors have continued to contribute towards these welfare and development-related activities since the advent of the post-colonial era (1947 for India, Pakistan and Bangladesh, and 1948 for Sri Lanka). However, as Bompani also notes in Chapter 7 with respect to Africa, western secularist and modernist ideas influenced narratives at independence. These predicted that, as the newly created nations developed and became economically stable, religion would dwindle and eventually disappear. Indeed for the newly elected and often western-educated elites that took up roles in the governments of countries such as India, Pakistan and Sri Lanka, religion as it was practised by the masses was typically viewed as superstitious, backward and likely to stand in the way of modernization and development. Like many new states emerging from colonial rule across the globe at this time, these countries initially adopted state-led models of economic development, with a strong leaning towards modernization and secularization. It is no surprise then that, upon separation from the British Empire in 1947, the founders of each of these states were committed to secularism. Despite the high levels of personal and communal religiosity in each, religion was to have no formal place in nation building and development. India 2 and Sri Lanka have both formally remained secular republics, while Pakistan has taken a different trajectory, becoming an Islamic republic by 1956, yet in each setting religious forces have been impossible to contain, with uneven and complex outcomes for development.