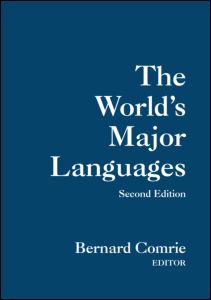 Indo-Aryan languages, the easternmost group within Indo-European, are spoken by approximately five hundred million persons in India, Pakistan, Bangladesh, Nepal and other parts of the Himalayan region, as well as in Sri Lanka. Gypsy (Romany) dialects of the USSR, the Middle East and North America are also of Indo-Aryan origin. Indo-Aryan is most closely related to Iranian, with which it forms the Indo-Iranian subgroup, speakers of which shared linguistic and cultural features, including a name they called themselves (Sanskrit ārya-, Avestan airya-). Among the innovations that characterise Indo-Iranian is the merger of Proto-Indo-European : Skt. asti ‘is’ pati-‘master, husband’, ajati ‘leads’, dadhāti ‘puts, makes’, dadāti ‘gives’, māt- ‘mother’: Av. asti, paiti-, azaiti, dadāiti (‘puts, makes, gives’), mātar-: Gk. esti, pósis, ágei, tithēsi, didōsi, mātēr (Dor.). Two major phonological features distinguish Indo-Aryan from the rest of Indo-European, including Iranian. One of these is an inherited property: Indo-Aryan retains voiced aspirated stops, as in Skt. gharma- ‘warmth’, dadhati, bharati ‘carries’. The other is an innovation: Indo-Aryan languages distinguish dental and retroflex stops. Originally, retroflex -ḍ-,ḍh- arose through sound changes, as in Skt. nda-‘resting place, nest’, mīḍha- ‘reward’, with -ī-, -īḍh- from -iẓd-, iẓḍh- (< -izd-, -izdh-).Such developments resulted in contrastive retroflex stops, albeit restricted, and the compass of such consonants was extended through borrowings from Dravidian languages. Most Indo-Aryan languages still have voiced aspirates and retroflex stops, although in certain ones, abutting on non-Indo-Aryan languages, these contrasts have been reduced: Sinhalese (Sinhala) has no aspirated stops, Kashmiri lacks voiced aspirates and Assamese (Asamiya) has no retroflex stops.