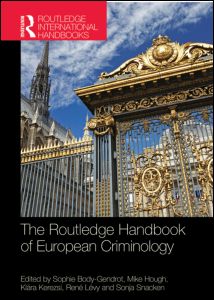 It is not just the economy

The Routledge Handbook of European Criminology

Arguably, the most popular criminological dictum of all times is the saying of French criminologist Lacassagne, protagonist of the anti-Lombrosian French milieu school, that ‘each society has the criminality that it deserves’ (Lacassagne, 1843–1924, p. 364). 1 In the early twentieth century this sociological theorem was elaborated in the thesis of Dutch criminologist Willem Bonger (1905). The main conclusion of his voluminous thesis, originally written in French in 1905 and later published in the USA and Canada in English versions in 1916, is that the level of crime in societies is determined by prevailing economic conditions. 2 In Bonger’s Marxist view the endemic economic crises in capitalist societies engender under-classes wherein social pathologies such as alcoholism, prostitution and crime abound. According to this deterministic viewpoint crime in a society where the means of production have been nationalized, and the economy is planned by the state, would simply cease to exist. 3 This optimist perspective seems to have exerted an enduring influence on theory formation in sociological criminology. Although few criminologists openly subscribe to Marxist notions of the causes of crime, criminological theories have throughout the twentieth century, been centred around concepts of class, conflict, relative deprivation, anomia, strain, inequality and unemployment (Merton, 1957; Vold, 1958). In communist countries Marxist criminology was de rigueur up to the 1990s. In the 1970s proponents of ‘critical criminology’ in the UK rediscovered Bonger and argued for a class-conscious criminology (Taylor, Walton and Young, 1973). Economists studying crime adopt similar positions. Many economists of crime tend to focus on the deterrent impact of criminal justice sanctions on criminal behaviour. If they analyse root causes, they join the criminological consensus by assuming that criminal activities are dependent on their opportunity cost, id est minimium wages and unemployment. From an economist perspective, criminal activities will increase in times of declining wages or increasing unemployment and vice versa (Grogger, 1998). The influential British social epidemiologist Richard Wilkinson has in a series of publications argued that inequality is not just a major source of stress-related health problems but also of violence and crime. The hypothesis of an overriding link between economic conditions and crime has a lasting grip on the political discourse on crime. In recent years several politicians and police chiefs in both the USA and Europe have warned for the likely crime boosting impact of the current economic crisis (UNODC, 2012). 4

The Routledge Handbook of E...

Gender and crime in Europe

The informal economy in Eur...